Recently, I tried to use Microsoft Access 2016 on my Windows 10 computer and it was so slow, it was essentially unusable.  I really needed to use Access for a project that I am working on so I had to find out why it was so slow.

My PC is about 7 years old with 8 GB of RAM running the latest Windows 10 64-bit version.  I frequently use the SQL Server Management studio and some of the Microsoft Office Applications (Word, Excel, OneNote) with no performance issues.  So, my first inclination is that it is an issue with the Access program!

Of course, I started out by doing a Google search.  This provided a few results which I started to go through.

How to Find out what Version of Microsoft Access you are running. 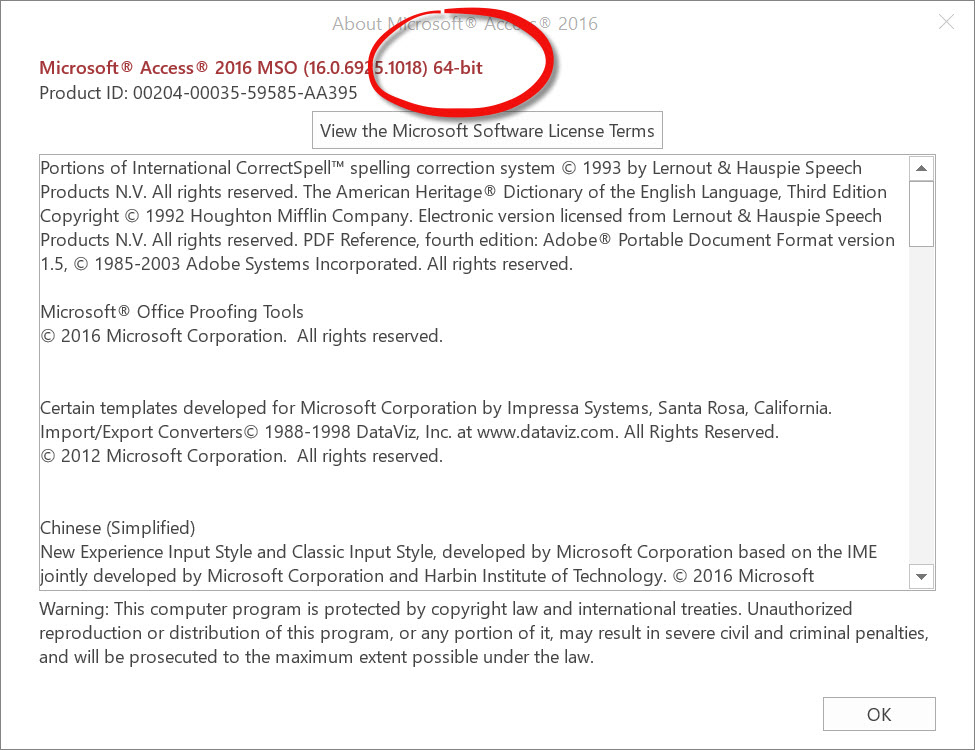 My version was showing 32-bit.  So, I made the decision to upgrade it to 64-bit.

This entailed signing onto my Microsoft Account from which I had purchased Office in.  The first point I wanted to mention is that I would have to install the entire Microsoft Office 64-bit suite of application, rather than just Access.  I selected the 64-bit Office version and started installing it.  Then, I received a cryptic error message saying I couldn’t access the server.  After researching this error, I did some more research just to determine that I had to uninstall the 32-bit Microsoft Office suite before installing the 64-bit versions.

So, I uninstalled Microsoft Visio, then installed the 64-bit version of Microsoft Office.  This worked successfully!

I tried Microsoft Access 2016 (64-bit) and I had the exact same performance issues as with the 32 bit version.  So, this did not fix the issue.

In one of the first posts, it referred to the following Microsoft article:

This article mentioned a bunch of things to try.

First, I did the procedure mentioned in the document to tune the ClearType Text.  This had no effect on the performance problem.

Next, I checked my video drivers, as the document recommended.  They all had the latest drivers and my video card did not have any settings that I could adjust.  So, this had no effect on the performance problem.

Next, I checked that I had the ‘Disable hardware graphics acceleration’ unchecked.  I did.  So, this had no effect on the performance problem

At this point, I didn’t believe that the performance problem was really related to my video.  I did some testing and determined that the issue seemed to primarily resolve around the refreshing of the property windows in Access when in design mode on object.  You could clearly see the property window slowly refresh whenever you clicked on an object.

So, I did some further research on the internet and tried the following:

Subdatasheet Name to None

A number of sources mentioned that you should change all your database tables to have property ‘Subdatasheet’ as ‘None’.  It defaults to ‘Auto’.  I only had a couple of Access tables in my database.  So, this didn’t fix the performance problem.

Connected Printers are all on

Some sources mentioned that you should have any connected printers turned on when using Access.  I turned on my printer.  This didn’t fix the performance issue.  After this, I changed the default printer to print to PDF just in case this had any impact…which it doesn’t seem to have any!

The problem re-emerged a few weeks later.  I had started/stopped Trusteer Endpoint Protection during this period.  However, stopping Trusteer Endpoint Protection did not work this time to correct the problem.  I did have Visio installed under a 2nd Microsoft User Id.  I uninstalled Visio and the Microsoft Access slow issues disappeared.  I think now that an Office Uninstall did something to fix the problem.